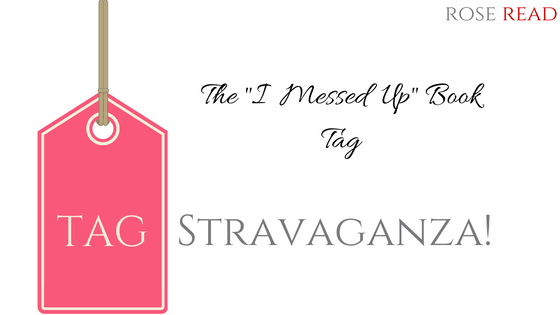 It’s a TAGSTRAVAGANZA!! With the busy-ness of my summer, I’ve fallen woefully behind on tags, so you’ll see lots of tags in the coming days as I try to catch up! I’ve got a short reprieve between summer classes and fall, so Imma try to knock all these out before August 22!

Thanks again to Carrianne at Carrinne’s Cuppa ‘n Critiques for the tag! This, as you can tell from the title, is mostly about the times you’ve messed up reading. Oops!!

A character appearance that you misread or imagined differently.

The Weasley twins are short and stocky in the books, but I can never not imagine them as the Phelps twins now…curse the Potter movies!

A character name that you’ve been pronouncing wrong.

I, like many others, was pronouncing “Hermione” as “Hermy-own” until she corrected me in Goblet of Fire (this was before the movies of course)…boy was that embarrassing.

An overused trope that is your guilty pleasure.

I am a sucker for Byronic heroes.

A cliché character type that you like better on screen than reading about.

In regards to the last question, Byronic heroes are typically very nice to look at on screen 😉

A word/phrase you learned because of its use in a book.

The titles of the Series of Unfortunate Events books have vocab I learned from the titles…austere, ersatz, penultimate, etc.

Have you ever not read or completed a required-reading book for school?

Yep; I completely skipped a book for my last class, which I believe is the first time I’ve ever done that, and I’m on my 1st year of grad school…I’d say that’s a pretty good record.

Have you ever skipped (or wanted to) a chapter from the point of view of a character you weren’t interested in?

I’ve never done that, but there are probably times I’ve wanted to. The only book that comes to mind right now is Carry On by Rainbow Rowell, which I was not a fan of.

Have you ever cancelled social plans to read a book?

No, if by definition “cancelled” implies the plans were pre-scheduled. But I have opted out of social outings that weren’t pre-arragend to read a book (like spur-of-the-moment let’s-go-out type things).

12 thoughts on “TAGSTRAVAGANZA: The “I Messed Up” Book Tag”