As I mentioned in one of my last posts, Banned Books Week was last week in the US, and lo and behold, the awesome Zezee at Zezee with Books tagged me in the Freedom to Read tag! How cool is this tag!? As I’ve also said, I’m currently taking a class on Intellectual Freedom and Censorship (which is boss), so I’m very excited to do this tag, as the topic occupies a lot of my time at the mo! Here we go! 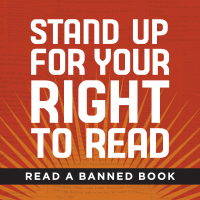 As a child, were you ever explicitly not allowed to read a book(s) by your parents/guardian and which book(s) was it?

Fortunately, I was never not allowed to read anything in particular. There were definitely movies my parents would not let me watch as a young kid, but as far as books, I read whatever I wanted. I suppose I never really wanted to read anything that would have been objectionable, though. I was very much someone who read books that had dragons and magic and fairies (not to say that many fantasies haven’t been challenged), or that were mostly for my own age range, so there probably wasn’t much risk of me being told I couldn’t read what I wanted because what I wanted was very tame anyway.

Has a parent/guardian ever challenged a book you were reading in school? Did the book get withdrawn?

Not that I can remember. The community where I grew up was trusting of teachers and chill about that, thankfully. However, as a teacher myself, I did have to provide alternative novel selections to a student whose guardian objected to 2 of the books I taught: Into the Wild by Jon Krakauer and Their Eyes Were Watching God by Zora Neale Hurston. The guardian provided a list of books that would be allowed. This was fine by me, as the parent was only concerned for their individual child and wasn’t asking for the books to not be taught to everyone. Ironically, in place of Their Eyes Were Watching God, I assigned the student Huck Finn.

Do you agree with the practice of banning books? Why or why not?

No! Because the sharing of ideas, even reprehensible ones, is essential to a free society. Censoring objectionable ideas from print doesn’t make them go away, it only makes them bubble under the surface, which I believe is way more dangerous than having them out in the open.

Have you ever read a book that shocked you enough that you thought it should be challenged/banned?

No (see: response to previous question).

Should libraries/schools monitor their books in case some people find them offensive?

Short answer: Wait. Libraries/schools always monitor their books. It’s their job. But potential offensiveness should not be a criterion. (This is a poorly worded question.)

Long answer: *Cracks fingers.* Good schools and libraries always carefully “monitor” what to put on their shelves or in their classrooms. The goal of any librarian or educator should be to select material that best suits the needs of their patrons/students while maintaining a diverse collection. As far as librarians go, that’s like one of the biggest parts of their job. They usually have a policy that includes certain criteria for book selection. But the word “monitor” is a vague term, so I’m not exactly sure how to answer this question. Does “monitor” mean read reviews? Does it mean consider its popularity, demand, or grade-level? Cause that’s all part of what a good selection process includes. But does it mean screen the selection process? Put labels on books in the collection? Place them in areas that have restricted access to certain people? There’s a multitude of ways libraries and schools can “monitor” their books, and the latter examples actually fall under what the American Library Association considers censorship. Terminology is very important here because lay people typically understand the word “censorship” to mean censoring materials from a high level, like the government. But librarians tend to define it more broadly, meaning any way that might prevent access, such as bad/misleading labeling systems or placement within the collection. So as far as if they should “monitor” books in case people find them offensive, I’m guessing the question is asking if offensiveness should be considered when making collection management decisions. The answer to that is no. That would be considered self-censorship.  Librarians and educators should not shy away from material just because some people might find it offensive. This can sometimes be difficult; professionals can easily let themselves fall into self-censorship because they want to avoid a potential controversy. But they have to try their best not to do that.

Have any of your favourite books been challenged/banned?

Yes! The Harry Potter books have been challenged many times. Fun Home by Alison Bechdel, Looking for Alaska by John Green, and The Things They Carried by Tim O’Brien are a few other favorites.

Have you ever read a book specifically because it was challenged/banned?

I don’t think so, though it may have been a factor in me wanting to read a few. I’ve read lots of books that have been challenged/banned simply because they’re great books. There is one book that my IF & Censorship class has made me want to read now, I Am the Cheese, because we read an essay on it.

A Compendium of Books

Fernanda @ Mystery Date with a Book

8 thoughts on “Freedom to Read Tag!”